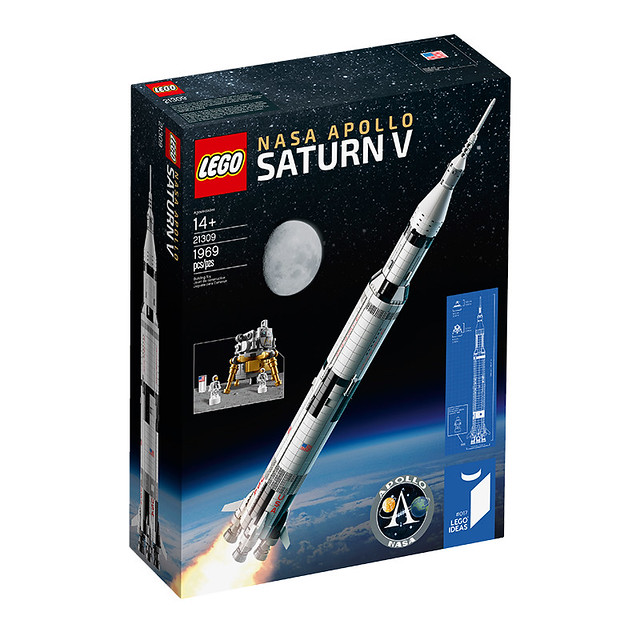 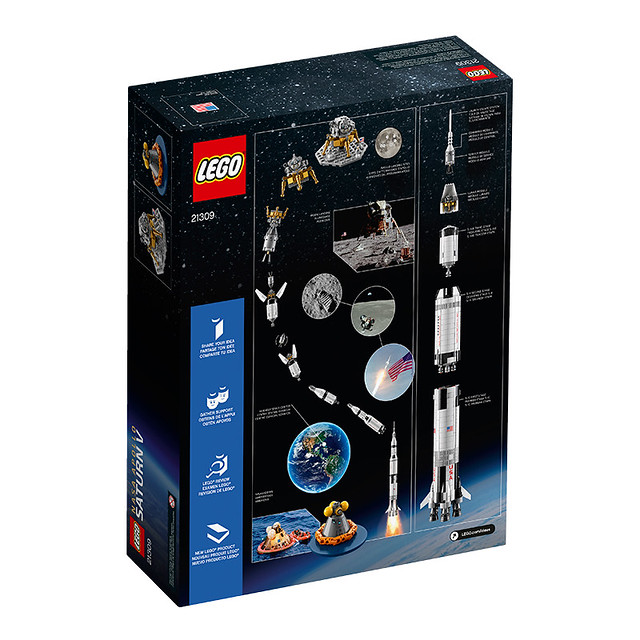 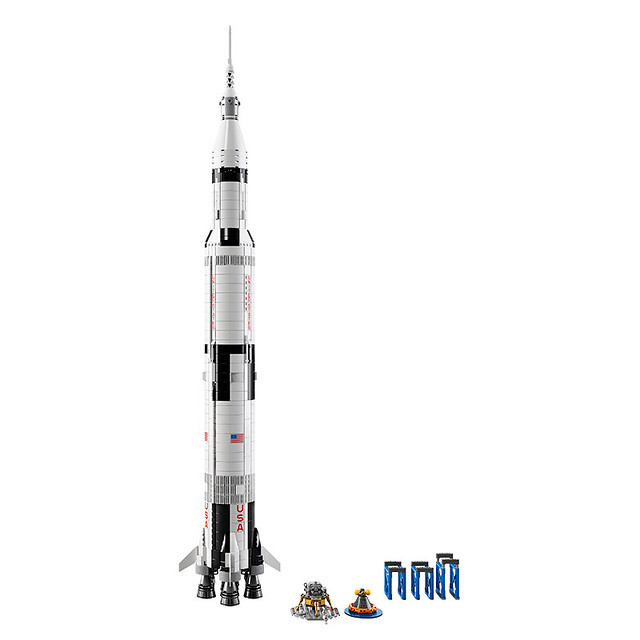 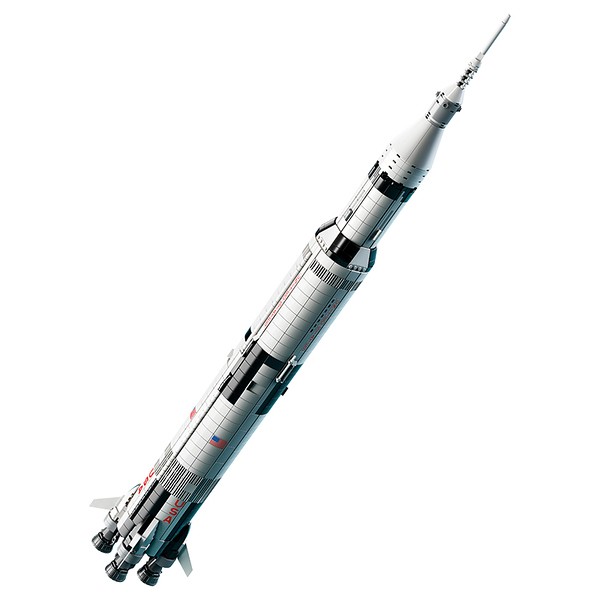 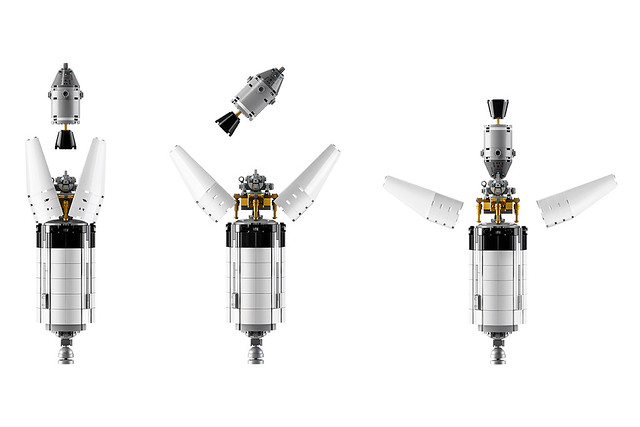 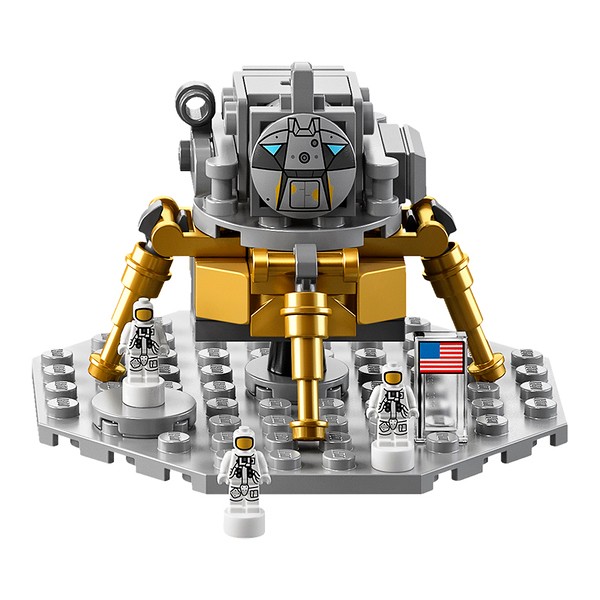 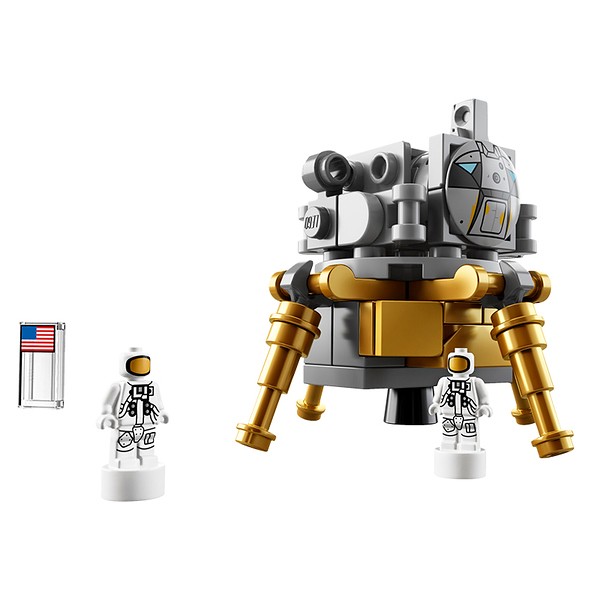 Make history with the LEGO® NASA Apollo Saturn V, the first rocket to put people on the Moon! Build the 3 stages of this stunning meter-high rocket and display it on the stand or launch into orbit. Offload the S-IC and S-II sections, dock the lunar lander with the command service module, and complete a successful Moon landing mission!

The set also includes 3 stands to display the model horizontally, 3 new-for-June-2017 astronaut microfigures for role-play recreations of the Moon landings, plus a booklet about the manned Apollo missions and the fan designers of this educational and inspirational LEGO Ideas set.

Despite never meeting in person, space and LEGO fans Felix Stiessen and Valérie Roche beat the odds with their wonderfully brick built version of the iconic Apollo rocket. It was a collaboration that tested their skills in numerous ways but, as it turns out, the long-distance collaboration also proved to be a significant benefit to their project, as Felix states “there were often times when one of us abandoned the project for a few weeks and came back to it later; however, thanks to the fact that it is a collaborative project, it was always the case that one of us continued making progress on the project and re-motivated the other”.

Felix and Valérie’s collaborative spirit was tranferred to the LEGO design team as well, who took over the project once it was approved, in order to ensure it lived up to LEGO quality standards. Two designers, Michael Psiaki and Carl Thomas Mirriam, motivated by their enthusiasm for space, teamed up to bring the final model to life. “We were actually not asked. I was so excited when I heard that the project was potentially going to happen, and told Carl about it because I knew he was also a space fanatic. We decided it would be really cool to work together since it is such a big mode, so we approached the Ideas team about helping develop the product”, Michael said.

Build the first rocket to land people on the Moon!

Display and role-play with this majestic meter-high LEGO® brick model of the NASA Apollo Saturn V. Packed with authentic details, it features 3 removable rocket stages, including the S-IVB third stage with the lunar lander and lunar orbiter. The set also includes 3 stands to display the model horizontally, 3 new-for-June-2017 astronaut microfigures for role-play recreations of the Moon landings, plus a booklet about the manned Apollo missions and the fan designers of this educational and inspirational LEGO Ideas set.

• Features a meter-high (approximately 1:110 scale) model of the NASA Apollo Saturn V with a removable S-IC first rocket stage with main rocket engine details, removable S-II second rocket stage with rocket engine details, removable S-IVB third rocket stage with the Apollo spacecraft and rescue rocket at top of the whole spacecraft, plus 3 stands to display the model horizontally.
• The Apollo spacecraft features the lunar lander and the lunar orbiter.
• Also includes 3 new-for-June-2017 astronaut microfigures.
• Great for display and role-playing the manned Apollo Moon missions.
• Includes a booklet about the manned Apollo Moon missions and the fan designers of this set.
• This set includes over 1,900 pieces.
• Measures over 39″ (100cm) high and 6” (17cm) in diameter.